Home » About Us » The Burleigh Travel Team » Ryan Barnett

Ryan has been a member of the team for over 15 years, having joined Burleigh Travel after a short stint in the construction industry. That wasn’t for him though and the opportunity to work in the Sports tours industry seemed the perfect fit as it combined his passion for both travel and sport. His role has changed over the years and he now heads up the companies sales team.

Having played numerous sports since a very young age he has enjoyed a variety of tours and working to provide others with similar experiences is what he enjoys most about his job. He has been fortunate enough to visit some fantastic places such as Dubai, Canada and Barbados, as well as many many European destinations.

In his day Ryan played Rugby to a high level and represented Gloucestershire County at all the junior age groups before being part of the Gloucester Academy. He then moved onto Senior Rugby with his local club Coney Hill and enjoyed over a decade of successful Rugby, winning promotions and the local cup 10 years in a row. Following this he ventured into the world of coaching and enjoyed 4 very successful seasons as head coach of Spartans Rugby Club, winning 2 league promotions and also reaching the National Cup Final at Twickenham! He now gets his “rugby fix” by coaching his son’s under 12 team… his most challenging task to date!

Ryan is married to Sharon and has two children, Ethan and Amelia and he enjoys spending his spare time with his family and if you can’t find him at home or the Burleigh Travel office, he’s probably be on the golf course!

“Barbados… nothing better than sitting on the beach with a cold Banks beer, or Rum and Coke, or Both!”

“Saturday 5th April 2008, sat in the stand at Empire Cricket Club in Barbados watching the veterans Final between Empire (with Roland Holder keeping wicket) and Isolation Cricket Club (with Carlisle Best bowling and a batsman called Dogfoot!)… Case of beer, Fried Chicken and a bunch of sledging Bajans!” 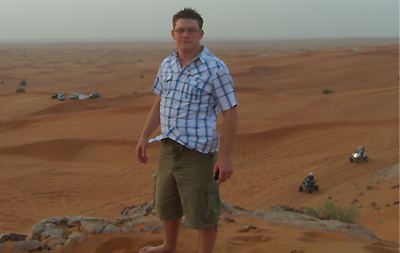 Ryan on a Familiarisation Trip to Dubai

Random Fact:  Don’t ever challenge me to downing a pint of beer… I’m pretty quick! 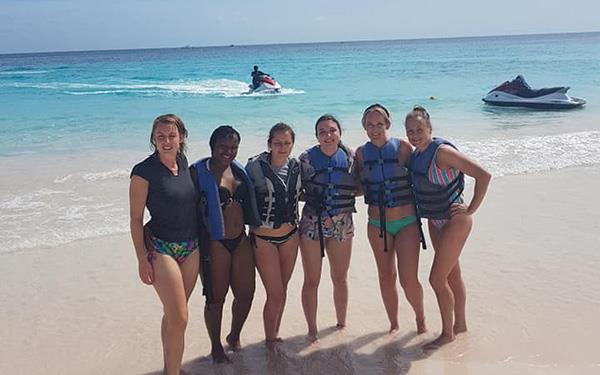