Pate’s Grammar School RFC U13 & U14 Rugby Tour to Cork

Pate’s Grammar School RFC U13 & U14 Rugby Tour to Cork

Pate’s Grammar School RFC U13 & U14 enjoyed a highly successful rugby tour to Cork in Ireland during the October half term and Burleigh Travel would like to congratulate them on remaining unbeaten on their tour playing some fantastic rugby in what were some difficult conditions.

On Wednesday 27th October Pate’s were invited to Kinsale RFC where they were able to enjoy a training session in the morning to ensure their legs were stretched out following the coach journey the day previously. This was a fantastic way for the boys to start their rugby tour enabling some fine tuning of moves in anticipation of the games in the afternoon. In wet and windy conditions both sides had exciting matches at Kinsale Rugby Club with the wind proving a key factor.

On Thursday the boys enjoyed trips to the Jameson Experience and also to Blarney Castle where they kissed the infamous Blarney Stone hoping it would bring them good luck for their evening games against Kanturk Rugby Club. This clearly proved to be the case as both teams ran out fairly comfortable winners after producing wonderful attacking displays of rugby however Kanturk should be congratulated for their never say die attitude and competitive spirit! 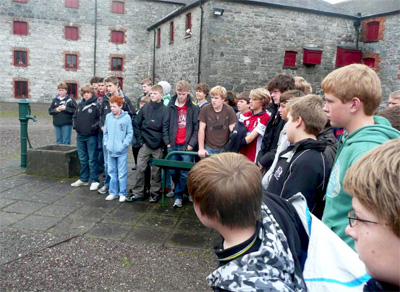 All the boys should be congratulated on their highly successful rugby tour to Cork and received praise from everyone especially the lead coach from Kinsale Rugby Club who advised “they had a fantastic time with Pate’s, the boys were impeccable and the teachers should be very proud of them!”

A link to a report by the coaches from Pate’s RFC U13 & U14 on their rugby tour to Ireland can be found here and please do not hesitate to contact us if you require any further information about rugby tours to Ireland.

We look at our Top Five Destinations for school rugby tours around the world - South Africa, Barbados, Australia, Canada and France.