Read about this Colts Rugby Tour to Barbados

This was a 9-day tour based on the West coast of this friendly Island. The touring party headed up by Andy Sweeny were located in air-conditioned apartments on a complex that has a pool, restaurant, bar, supermarket and evening entertainment.

Barbados offers an irresistible mix of laid-back Bajan lifestyle, where the tropical sun is fanned by the trade winds together with a host of sandy beaches dotted along the coastline. It used to be known as “Little England” and although the island has enjoyed 30 years of independence a warm welcome is always shown to its British visitors.

The group played 3 games during their tour; 2 against a Barbados Select XV U19 squad and one against fellow tourists Bradford U19. All of the games were played at the unique Garrison Savannah rugby pitch, which is in the centre of the racecourse of the same name.

If you are lucky, a race meeting will be going on whilst you are playing rugby which will certainly add to the atmosphere!  After the games, the hosts looked after the tourists very well, and even introduced them to their own style of post-rugby games such as ‘Bajan Tunnel’. 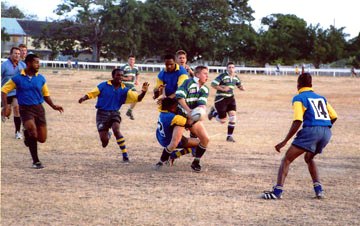 Whilst not playing rugby, the group made the most of the wide variety of day trips available such as an island tour and beach club visit, and a day on a Catamaran.  In the evenings, they did the rounds of the local bars, many of which offer special deals where you pay to enter and then drink for free all night!

The rugby tour to Barbados an unforgettable experience for all involved, in particular the favourite aspects were:

It would be unjust to the island to describe Barbados as anything less then paraidse. It's welcoming culture, white sand beaches, water based excursions and passion for sport make it one of the top destinations for school tours.