The group enjoyed a two-week tour to Canada, experiencing its natural wonders and wide open spaces and visiting Toronto, Canada’s largest city and Ottawa, the capital.  Each city offered a diverse range of activities for the group to enjoy, including the CN Tower and a Blue Jays Baseball game in Toronto, and the Parliament Buildings and white water rafting in Ottawa.

The group took part in the Ottawa Indian’s Rugby Festival; held over two days, the Festival is open to men’s and women’s teams with both a social and a serious section, as well as a junior men’s section.  Teams travel from all over Canada and the USA to take part, as well as from further afield.

South East Region Ladies remained unbeaten in the pool games, and progressed to the finals on the second day, losing a closely fought final against the Ontario Ladies XV to the sound of ‘Swing Low, Sweet Chariot’ echoing around the ground.  There was plenty of socialising to be done, and also the chance to watch exhibition matches between Canada vs Canada U23 women’s teams and Quebec vs Ontario.

The group also managed to fit in a sightseeing day in Niagara Falls, the highlight being a trip on the Maid of the Mist boat, which takes you as close as you can get to the foot of the magnificent Horseshoe Falls.

The group rounded out their tour with an emphatic victory over Peterborough WRFC, running out 46 – 7 winners in the friendly game and a close victory against an Ontario U19 XV where the score was 12 – 5.

South East Region Ladies RFC U18 thoroughly enjoyed their two centred rugby tour to Canada with the following highlights being memorable for all:

If you would like to tour to Canada on your next rugby tour, click here to request your tailored rugby tour itinerary and here to learn more about Canada as a rugby tour destination. 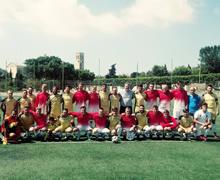 We look at some of the best destinations of offer for aremd forces football teams. All these destinations offer competative football, exciting excursions and fantastic hosting.