Read about this senior rugby team's tour to Tallinn

For their rugby tour to Estonia the players from English & American RFC were based in Estonia’s capital Tallinn, on what was their 13th consecutive tour with Burleigh Travel. The city enjoys a rich cultural heritage and unique atmosphere characterised by its wealth of historical buildings such as the medieval town hall, Toompea Castle and Kadriorg Park.

Within the old city walls cobbled alleyways lead to picturesque squares which house an abundance of lively bars, nightclubs and cafés all serving beer at low prices. The entertainment area is all situated off the ‘Old Town Square’ making a pub crawl extremely easy. More cultured than many of its Eastern European rivals, Tallinn has a definite Scandinavian influence due to its proximity to Finland.

Having assembled at Gatwick Airport the group made their way to Estonia where on arrival the group were given an interesting and informative briefing about Tallinn. After a short transfer to their accommodation, the rest of the night was free to explore the various nightlife on offer. A visit to one of the city’s ‘gentleman’s clubs’ was on most people’s itinerary.

Having had a free day for sightseeing the groups third day was the day of the match and after breakfast the players sampled the traditional ‘morning sauna’ before travelling to their fixture. In a hard fought contest the tourists were victorious and after the match time was spent with the hosts where the massive cultural differences of the two teams was disguised after several beers.

In the evening the group headed for the ‘Old Town Square’ to continue their celebrations in the many bars and clubs located around this area.

For their final full day in Estonia the group travelled out of the city to enjoy the countryside and visit a hotel located by one of Estonia’s many lakes. The day was spent swimming followed by a sauna and a meal in the hotel in this picturesque setting. With temperatures in the high 70’s the climate felt more Mediterranean than Baltic and the group gained an insight into the other opportunities outside of the city of Tallinn in what was a very memorable tour.

E&A’s rugby tour to Estonia’s Cultural Capital City Tallinn provided a great tour destination that was thoroughly enjoyed by all who attended thanks to the following highlights: 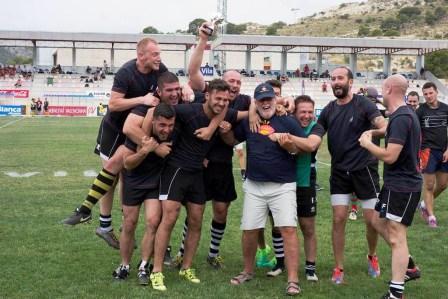 Rugby tournaments and festivals offer an unforgettable weekend of rugby, fancy dress and parties! Check out some of our most popular events taking place in Europe in 2018!