Liverpool University Cricket Club have recently returned from their highly enjoyable and successful cricket tour to Australia. This cricket tour was a 19 day 4 fixture tour based in Brisbane, Sydney and Melbourne where they even managed to watch England retain The Ashes! Burleigh Travel would like to offer their congratulations to the team on their performances on the field and clearly their fantastic support at The MCG which no doubt helped the England Cricket team in winning the test match!

The cricketers departed London on 12th December with a stop over en route in Singapore enabling them to have enough time to explore some of the wonderful experiences on offer in this vibrant destination such as the fantastic night safari or the vibrant Clarke Quay area.

After their overnight stop the team continued on to Brisbane to begin their cricket tour. The weather in Brisbane was not the best as has been shown in the news however there was enough of a break in the rain to ensure the Liverpool University boys managed to get some cricket in during their time in this fantastic city. The game was against Beenleigh Logan Cutters CC who provided a stern test for the first game.

With England 1-0 up in The Ashes at this point the local side saw this as their opportunity for some sort of revenge and, batting first they totalled a respectable 157-6 off their 20 overs. Liverpool University’s bowlers did pretty well considering the vastly different conditions in 98% humidity! The batsmen, however, found that their time in the field did little to help their batting and some excellent bowling from Beenleigh ensured a comfortable victory for the home side. Afterwards there was some fantastic banter in the clubhouse with the Aussie side showing some brilliant hospitality. 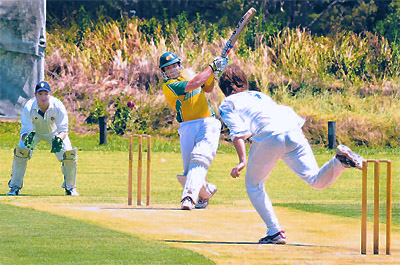 This ensured that, unfortunately, the first part of their cricket tour to Australia began unsuccessfully for the team however, after a few days in Brisbane, the team hoped for a change in fortunes when they travelled to Sydney to continue their cricket tour and played the famous SCG XI. The SCG XI are due to play the MCC in a game later in the Australian summer so the Liverpool University side saw this as a wonderful opportunity to show how good all English sides are! 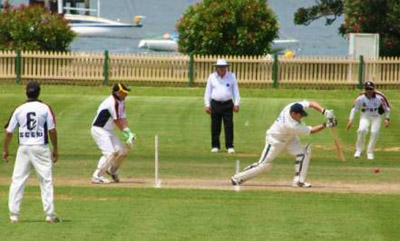 Captain George Thomas won the toss and decided to bat first however the top order struggled to begin with and were 38-3 after the first 10 overs. The middle order, however, really came to life at this point and some big hitting later in the innings meant that they finished on a very respectable 132-8 from their 22 overs. The bowlers then had their chance and a steady fall of wickets, including one sensational catch, meant that SCG XI needed 37 off 5 overs and 11 from the final over which proved beyond them as Liverpool University CC secured their first win on their cricket tour in Sydney by a dramatic 5 runs! A fantastic performance by the whole team which was rounded off by some fantastic hospitality in a nearby hotel. The team then spent Christmas in Sydney enjoying some of the wonderful scenery on offer including the infamous Opera House and Harbour Bridge.

For the final leg of their cricket tour to Australia the Liverpool University CC XI travelled to Melbourne to enjoy the wonderful environment of the MCG and the Boxing Day Test Match between Australia and England. The boys enjoyed their time being part of the ‘Barmy Army’ and made their voices heard cheering England to a huge victory to ensure they retained The Ashes. Once the game finished the Liverpool boys managed to pass their flag to Matthew Prior to assist in the celebrations and this was waved by the England wicketkeeper all around the ground. I am sure all of the boys would agree this was a fantastic end to a wonderful cricket tour to Australia! 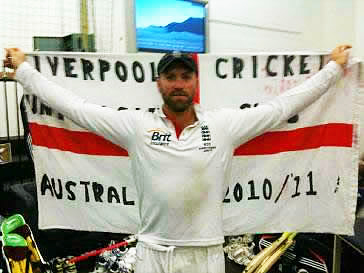 The Liverpool University CC team all thoroughly enjoyed their trip to Australia and if you would like to enjoy an amazing  cricket tour to Australia with the possibility of including Brisbane, Perth, Melbourne, Sydney or Cairns please do not hesitate to contact us.

The end of year tour at University is one of the most important events in the calendar with memories made, friendships sealed and legends created. We look at some of our top university cricket tour destinations to help get the ball rolling.