Due to the success of last year’s event where the overwhelming generosity of the evening’s guests rasied a grand total of £1,500 for the Tamara Johnson Trust, on the 20th August 2009, Burleigh Travel hosted a second charity evening at the prestigious Hotel du Vin in Cheltenham to further our support of this deserving cause.

This years guests were once again treated to fine food and wine along with the exccellent company of Andy Deacon and Mike Tindall; Gloucester RFC legends who were guest speakers for the evening.

The evening began with a champagne reception in the hotel courtyard followed by a three course meal of crab and apple risotto, roast chicken breast with sorrel sauce and Eton Mess for dessert, specially created for the event by Head Chef Jon Parsons.

The event raised over £1,300 for ‘The Tamara Johnson Trust’, a charity set up for the Bath RFC Ladies player following her accident that left her paralyzed from the chest down. Tamara is currently living in a residential care home receiving daily physiotherapy and has slowly regained feeling all over her body. Due to the spinal injury all improvements are obviously slow but she is still moving forward and remains amazingly positive and cheerful. Added to the funds raised at last year’s event and through other fundraising activities, Burleigh Travel have now managed to donate over £4,400 towards the cause.

Prizes for the charity auction were donated by Burleigh Travel and other local businesses and organizations including Raging Bull, Bath RFC, Network Solutions and Hotel du Vin and the funds raised will help Tamara with her rehabilitation process. Bids were placed on items such as a signed Bath RFC shirt and ball and a luxurious stay at the Celtic Manor Resort with tickets to the Newport Gwent Dragons Vs Gloucester match next January.

Burleigh Travel would like to take this opportunity to thank all of the event sponsors for their continued support.

Following the meal and auction, a Question and Answer Session was held with guest speakers and Gloucester rugby legends Mike Tindall and Andy Deacon, where Mike was quizzed about his recent appearance in ‘Hello’ magazine with his girlfriend and the Queen’s granddaughter Zara Phillips and Andy about the new regime at Gloucester Rugby Club. 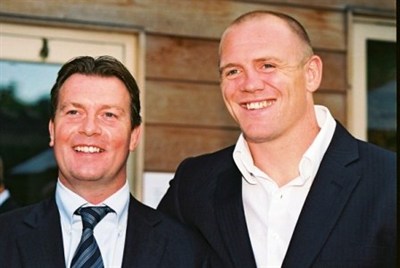 Chris Kite, Director of Burleigh Travel and compere for the evening said he was delighted about the support for the event in these difficult times and that the funds raised will make a huge difference to Tamara’s rehabilitation.

Following the success of last year’s trips, Burleigh Travel are currently organising Supporters Tours to Glasgow and Biarritz for those wishing to support Gloucester RFC in the upcoming Heineken Cup. Prices start from £109 per person.