Celebrate Commonwealth sport and be inspired for your next sports tour

Athletes from 70 nations have arrived in Glasgow to compete in the Commonwealth Games 2014 which get underway with the opening ceremony later today. Talented individuals selected to represent their country will compete in 18 different sports ranging from athletics and cycling to netball, rugby and squash!

The games are a sport lovers dream with a sport for every interest and a blend of team and individual events on the track, in the pool, on the pitch and in the arena.

Glasgow is buzzing and ready for this spectacular sporting event to kick off. We hope that the Commonwealth Games 2014 will see the same sporting success for British athletes as in the London Olympics two years ago and that the success of the games will encourage many people of all ages to get up and get involved in sporting clubs and teams accross the country.

Working in the Sports Tour Industry is always interesting. There are a diverse variety of sporting destinations within the Commonwealth where some of our most popular sports are played widely all the way down to a grass roots level at a range of ages and abilities due to their colonial roots. These include Netball and Rugby; two of the most popular team events in the only major games to include competition for these sports.

The World's Top 10 netball teams are all Commonwealth nations; Australia, New Zealand, England, Jamaica, Malawi, South Africa, Fiji, Wales, Barbados and Trinidad & Tobago. As netball is dominated by the Commonwealth nations, many of our touring netball teams choose to visit Barbados and South Africa as they are established touring destinations with lovely scenery and exciting day trips but also offer competitive netball at a reasonable budget.

The England Indoor Netball Association toured to South Africa with us recently and as you can see from the photograph of one of the national team members, there is a lot more to do than just playing sport whilst in this fantastic country.

The diversity of South Africa as a sports tour destination

Many of our school netball teams who tour to Barbados do so to experience netball at a very high level. Some even get to play against a National Representative side which is an amazing opportunity and something that stays with the girls forever – something that Dubai College spoke highly of when they visited Barbados for their netball tour in 2013. 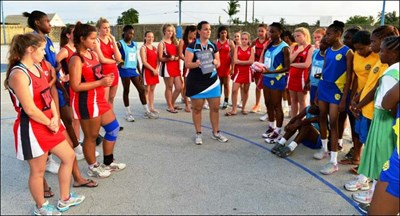 Rugby is played at the Commonwealth Games as a Sevens Tournament. Again, you will find that the World Top 5 rugby sevens teams are Commonwealth nations; New Zealand, South Africa, Fiji, England and Australia and most of these teams feature at the top end of the World Rugby Rankings for the 15 a side game too. Many of our touring groups who want an International tour at a reasonable budget travel to Canada. Queen Anne High School from Fife in Scotland are currently on their rugby tour in Canada with us enjoying the rugby and attractions of Eastern Ontario and gainnig a first hand experience of a sports tour within the Commonwealth.

We have everything crossed for a successful Commonwealth Games 2014 in Glasgow and particular hope that the English Athletes bring back some medals and this inspires many of us to join sporting teams and travel on tours throughout the Commonwealth in 2015 and beyond.

Good Luck to all the British Nations!!!

With this years season cut short due to unprecedented circumstances, why not reward your team with a fantastic start to the 2020/21 season by enjoying a rugby tour to one of Burleigh Travel’s new and exciting mini & junior rugby events taking place in October & November 2020.