Croatia was somewhat unprepared for the incoming swarm of Wanstead Tourists.

Tourists gathered in the pre-dawn air of Gatwick North Terminal, the caps allowing for easy identification - besides the obvious female-repelling facial hair. North Terminal Wetherspoons had seen the incoming tide of tourists and had 4 bar staff on. They've done this before. Croatia hadn't.

The early start time of 4am put sleep at a premium. A few refreshments and the odd breakfast sarnies put most tourists aright and ready to go. Well, most. One particular tourist - who shall remain nameless, and should have known better after decades on the club management committee spent too long at the bar and never made the plane. Easyjet, obviously seasoned tourists simply followed the pirates code and left him behind. His tour was over, alas, but ours was just beginning.

The bar on the plane was just as well prepared as the previous, the supply of miniature bottles was seemingly inexhaustible. A day on the lash in prospect? Not with former Marine commando Cull in charge.

We could have gone to the pub, we could have gone to the beach, but oh no, instead we spent three hours in a river. This was ostensibly white-water rafting, but unlike the artificial rapids like in Lee Valley, this was real. It was a mountainous gorge flowing down from the mountains to the sea. There was plenty of white water, but even more of the normal green stuff. While the scenery was spectacular, the drizzle was not, and with some boats sitting very low in the water full as they were of front row forwards, it wasn't easy going.

The old boys who didn't go rafting instead took a walking tour of the old town. Huge thanks to the tour guide Jelena. The old boys who took the tour all pretty much fell in love with her and also Split.

So, in an almost-unheard of state of sobriety 14 hours into tour, a plague of tourists descended onto Split. We arrived at place, we consumed all available liquid resources and out-competed the native species and then we moved on. Eventually, we found a bar equipped to deal with 67 thirsty tourists and settled at the Fabrique bar for most of the rest of the evening. Well, most of us. Some of our number decided to do some investigations into the new financial innovations being pioneered in Split.

The next day, there was another walking tour for those who missed out the previous day, and once again came highly recommended. Unfortunately, many were still recovering and/or on the phone to the bank. By this time the weather had dramatically improved so we headed to the beach for a spot of beach rugby.

Now this was a sight to behold, not entirely unlike a mass stranding of whales. In an Attenborough-esque twist, one alpha whale was brutally usurped by his younger rival.

In the evening we donned our magnificent historically accurate reproductions of Victorian fore-runners. These Victorian outfits were spectacularly accurate, it was quite uncanny. We toured a few bars, once again locust like in our speedy destruction of all the beer in venue, eventually settling with going back to Fabrique, once again the only venue set up to service our custom, but not before gaining another half a tourist.

On Sunday we had a delayed kick off in our fixture against Makarska Rivijera. We were victorious in a close game against a weakened Makarska team. Ruge scored one, Lewis Pruce scored two tries, Fonty one, Geary one (assisted by our previous nights lineout training) and Jordan one. I'm sure there are more but nobody fancies reminding me. Final score was approximately 42-30. It could have been more, but in a disgusting incident of hat-tick avoidance, Prucey attempted to pass the ball in the in goal area to veteran Fedele. Fed was so appalled that someone would do such a thing, he couldn't take the pass cleanly and the try wasn't scored. I think with Makarska at full strength and Wanstead hangover-free would be a very interesting encounter, and we were all impressed at the standard of Croatian Rugby. 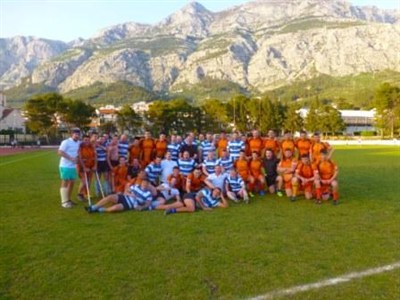 After that, there was a Vets game, which finished 19-12, Tony Gipson rolling back the years to score, captain Burnsy scoring twice which Gonch knocking over the extras. We enjoyed the excellent hospitality provided by Makarska, who have a very nice club at a multi-use stadium with amazing scenery, and also mountains. 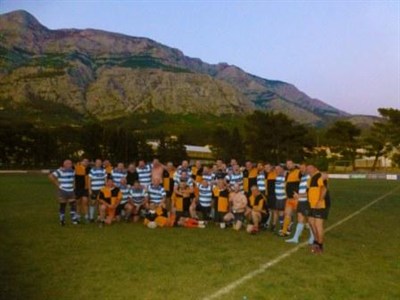 We gave up finding places that can cope with 67 tourists, and simply went back to Fabrique for the last evening on the smash.

Apart from one shameful act (shame, shame), the morning was a pretty quiet affair on our way back to Gatwick. And thus concluded another excellent tour.

Many thanks to Cully and Burnsy for organising the tour and Jason for being whip master. Roll on next tour!