Burleigh Travel would like to wish Mike Tindall every success in his new role as England captain during their 2011 Six Nations campaign. Burleigh Travel have been proud to sponsor Mike at Gloucester Rugby for several seasons and hope his successful skills captaining at club level transfer to his new role with England.

Mike has been a wonderful ambassador for the game as demonstrated in the picture below when he attended a fundraising dinner at the Hotel du Vin in aid of the Tamara Johnson Fund. More details of this event can be found here. 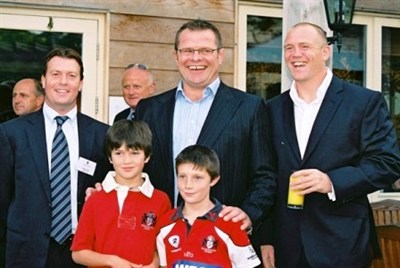 Burleigh Travel is currently sponsoring Gloucester Rugby’s Luke Narraway during the 2010/11 season. Luke is currently involved in the England Saxons squad and, following his fantastic performance last week against Italy ‘A’, will once again be representing the Saxons in their game against Ireland ‘A’ in Belfast.

Both Mike and Luke are fantastic ambassadors for the game and Burleigh Travel wishes both players success this weekend in their respective roles.