Read about this Military team's tour to South Africa, including Pretoria, Durban, a Game Reserve and Cape Town

During their senior rugby tour to South Africa the players from REME RFC were able to experience South Africa’s diversity by visiting four centres during the 15 day rugby tour.

The rugby tour started in the Capital, Pretoria, where the group were based for 3 days, during which time they played a match against Pretoria Defence Force and spent an excellent evening in the company of their hosts enjoying a meal and drinks.

The following day, the rugby tour moved on to Durban for a 3 day stay. The team had a fixture against Wentworth RFC at the home ground of Durban Harlequins. Whilst in the Natal Province, the Armed Forces side took the opportunity to visit the Battlefields of Isandlwana and Rorke’s Drift, where battles took place in both the Boer and Zulu Wars. They also visited the War Musuem and visited the Zulu Memorial sites.

The rugby tour then moved on for a two day Game Drive in Mkuze, Northern Natal, which also incorporated a morning boat cruise on the Jozini Lake. The Game Drive and the reserve where they were staying allowed the touring team to see a variety of wildlife in their natural habitats, especially when travelling in 4 X 4 vehicles through the reserve. 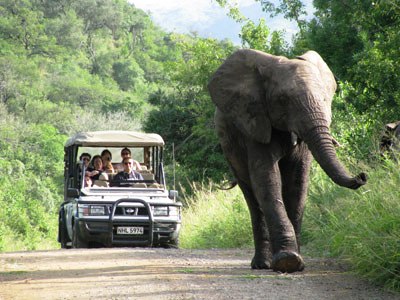 The final part of the tour took the rugby team to Cape Town for the last 7 days of the tour. During their time here, the team played two fixtures against Hamilton RFC & Villagers RFC. The fixtures all throughout the tour were a particular highlight for the forces team as they were all well matched and made the British Tourists feel “exceptionally welcome”. The South Africans  are a “rugby mad” nation and they are very keen to promote themselves as serious rugby players and supporters, which is great for any rugby tour!

The tour came to an end after fifteen days with a direct flight back to London but the memories and stories will stay with the team forever.

The rugby tour to South Africa was fantastic for every member of the touring party from the youngest to very oldest. Particular highlights include:

If this is a tour that appeals to you and your rugby club, please contact us through our online enquiry form

and we will happily provide you with the information you need.