The boys brought home some silverware

South Woodham Ferrers travelled to Belgium this year with their sights set on becoming the under 19 champions of the Gent Easter Rugby Festival. This year’s event marked the 29th anniversary of the festival.

The boys set off on an early Friday morning to catch their ferry over to arrival at their destination in the afternoon. This gave the boys the opportunity to settle into their accommodation before attending a local Irish Pub.

The team set off to the Gent Festival, feeling refreshed after a good sleep and breakfast. Their first two fixtures were evenly matched, with scoreless draws against Penrith and Darlington Mowden Park. Having finished second in their group, the boys were placed into a 3 team group with previous opponents Penrith and new comers Sittingbourne. Having another close encounter with the Penrith team the boys unfortunately lost out 7-0 to their opposition. The final group game saw the boys sharing another draw, 5-5, with Sittingbourne. 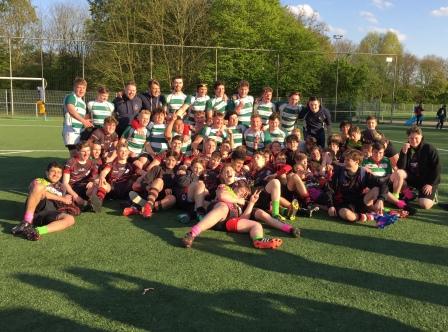 With all the group games completed the Ferrers side found themselves battling Cheshunt for a place in the final. An excellent performance saw them leaving as victors with a 14-0 win. Highly motivated from their big win, the team pushed forward to the festival final against Darlington Mowden Park. Another closely contested game results in a final defeat to the boys losing 3-0! But they finished a very respectable second in a festival that saw them only concede 2 tries throughout the duration of the tournament.

With a fantastic display of rugby behind them the boys finished of the festival at its famous closing party. A night with an all you can eat BBQ and tribute bands will surely stay fresh in the memories of the Ferrers players and coaches.

With the Sunday free to relax and explore, the boys wanted one last opportunity to have some friendly competition at the nearby Go Karting track. Before catching the ferry on Sunday the group decided to visit the Ypres war memorial to complete the last step of their Belgium Tour.

Their rugby tour to Belgium was thoroughly enjoyed by all who attended, with the following highlights being memorable:

Find out all Beglium has to offer on your next rugby tour. A great destination for both senior and junior rugby tours.