A memorable 11 Nights in South Africa on a school rugby tour!

Ryde School embarked on an amazing 11 night School Rugby Tour to South Africa in July 2018. The majority of the tour was based in the stunning Cape Town, with a one night trip inland to a fantastic Game Reserve! During their tour the school played against four local rugby teams and provided a coaching session with a township group.

The school set off from Heathrow on a Tuesday evening on a overnight flight to South Africa, arriving in Johannesburg where they boarded a connecting fight to Cape Town. After they arrived at the hotel the team headed out to get some food, as you can imagine after a 13 hour flight there was a hungry squad! After they had refuelled, they “enjoyed” a training session to blow away any cobwebs! After a hard session the team came back to the hotel for a well deserved dinner.

After breakfast on day two, the team visited the popular waterfront area where they headed out on an action packed jet boat ride. Whilst on the boat trip the group were lucky enough to catch a glimpse of some whales. After a very windswept boat trip the group explored the waterfront before heading to their first fixture of the rugby tour against Camps Bay RFC. The fixture was played in a very special backdrop of Table Mountain and the Atlantic Sea. After a hard fought game Ryde came out on top with a nail biting finish winning 28-26. First blood to the tourists! 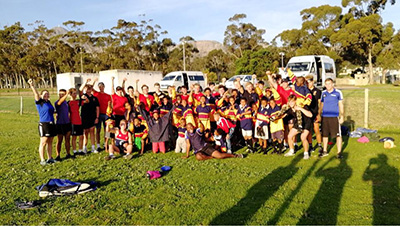 During day’s 3 & 4 of the rugby tour the team packed in the sightseeing. They explored the stunning sights of the Chapman’s Peak Toll Road, Camp Peninsula, Hout Bay, Simon’s Town and then traveling through the Cape Nature Reserve. The team also took time to visit Boulders Bay where they got to see the famous African Penguins! After this action packed day the group met with the coaches from Kasselsvlei High School who they would be playing in their next fixture on rugby tour. Day 4 was one of the highlights of tour with a very moving tour around Robben Island, where Nelson Mandella spend 18 years in prison. 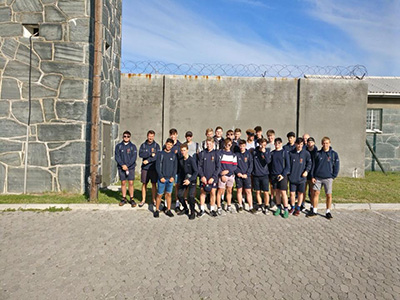 After this memorable experience, the group headed for Table Mountain for a 2 hour hike to the top. This allowed the group to take in the picturesque 360 degrees views from the top that looks down over Cape Town. After this the group had the evening free to prepare for the next fixture against Kasselsvlei. 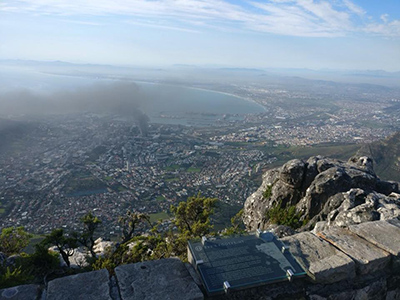 The next morning was free to explore the V&A Waterfront. Highlights were a visit to the The Springbok Experience Rugby Museum where the team learnt about the history of Rugby in South Africa and explore the interactive activities. In the afternoon the team travelled to Kasselsvlei for their next fixture, where they would have another hard game on their hands. Deep into the second half the scores were very close 10-7 but in the last 10 minutes Kasselsvlei started to exploit holes in the Ryde defence and ran away with the game 34-7. 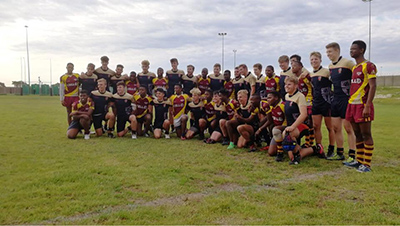 Next stop on the tour was the Aquila Game Reserve for a thrilling safari experience. Setting off after breakfast on Tuesday the team arrived early afternoon and had some time to relax before heading out on an afternoon game drive where they got up close with elephants, wildebeest, springbok, hippos, rhinos, ostriches and even lions! The next day the team were up early for another game drive where they witnessed the famous and breath-taking African sunrise over the mountains. Further opportunities to experience the African wildlife at close quarters followed with plenty of animals ticked off the list; including the giraffes. After this brilliant stay the group headed back to Cape Town to prepare for their next fixture.

After breakfast the team headed to the home of South African Rugby, Newlands Stadium for a stadium tour. After a fantastic morning the group travelled to Siphamandla for their fixture. This was a very tight affair after a few changes from Ryde but managed to secure the win with a high scoring game 64-47.

With the team feeling a little stiff and a few bruises, they had the day exploring the wine area in Stellenbosch. Here they stopped at Spire for a chocolate and grape juice pairing session before enjoying a first class bird of prey display. While the rest of the day they explored the historical city of Stellenbosch. 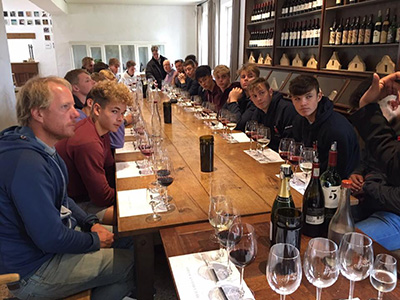 After creating some unforgettable memories in the 12 days on their school rugby tour in South Africa, the team flew home. The teaching staff have since reflected positively on the whole experience and particularly the quality of the fixtures in terms of how well matched they were and all felt that the township coaching experience was something that would stay with them forever and that many of the pupils will look to repeat and build upon in future life.

This blog is just the highlights from the trip, if you would like to see the brilliant full Rugby Tour Blog done by Ryde School while they were in South Africa click here!